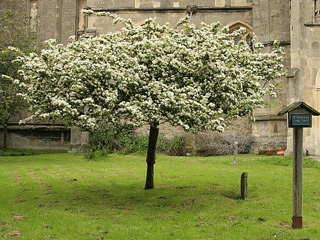 Welcome to this brief guided tour of St John's Church. More images are included in our Photo Gallery.

We approach from the High Street through the churchyard and, immediately on the left, is a specimen of the Glastonbury Thorn (crataegus oxyacantha praecox). Legend has it that Joseph of Arimathea arrived in Glastonbury and planted his staff on Wearyall Hill, where it took root. It flowers twice a year, in spring and around Christmas. A flowering sprig of this Holy Thorn is sent every year at Christmas to the Queen by the Vicar and the Mayor of Glastonbury.

The church is built of Doulting stone, Street stone, and the local Tor burr. There has been significant refacing done at various times, particularly on the south side. Current restoration work includes the exterior of the clerestory windows. The magnificent tower rises to a height of 134½ feet (41 metres) and is the second tallest parish church tower in Somerset. 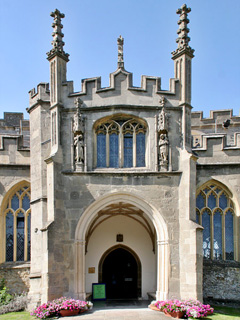 The porch is decorated with two statues, one of John the Baptist and one of St George.

We enter through the South door. To the left is the font. Designed by Sir George Scott in 1856, behind the font is an 18th Century copy, of the 'Madonna of the Palafreniere' by Caraveggio showing Mary teaching Christ to bruise the serpent's head whilst St Anna looks on.

To the left are two large carvings, each from a single elm tree. The 'Madonna with Child' and the 'Resurrection Christ' were early works of Ernst Blensdorf, carved in Somerset in 1945 after his escape from the Nazis.

The nearby screen, designed by Bligh Bond in 1926, hides the organ.

At this point, take time to experience the magnificent view down the length of the church, to the high altar.

Over the north door is a very fine carved royal coat of arms of the time of Charles II. On the reverse is a second coat of arms, that of the Hanovarians.

The stone pulpit was also designed by Scott and was carved by Frederick Merrick, with images of the twelve disciples.

The hour glass stand came from an earlier pulpit, the hour glass being given by the American Embassy to replace the one lost as the allied forces left the area just before D-Day, 1944. 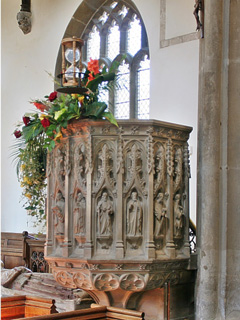 Below the pulpit is the tomb of John Cammell, who died in 1487. The fine alabaster carving has many traces of its original paint, with which it was decorated.

Behind the pulpit is the Joseph of Arimathea window. The 1936 stained glass in the north window is by AJ Davies and depicts St Joseph, King Arviragus, St Aristobulus and St Simon the Zealot.

In front of the window is what may have been part of a shrine to Joseph of Arimathea, erected in the abbey in the early 15th Century. It was moved to its present position in 1928. Displayed in a case on this tomb or shrine is a funeral pall made in 1774 from a cope. This cope was traditionally worn by Abbott Whiting, put to death on the Tor in 1539.

On the east wall is a 17th Century 'Pieta with Two Angels' from the school of GB Langhetti. The safe below contains a 17th Century baroque ivory crucifix on a cross of bog oak, an Elizabethan chalice and 18th century silver.

The book case contains a chained copy of Erasmus' Paraphrase of the New Testament in English, bought in 1548, volumes of Fox's Acts and Monuments of 1571 and a Breeches Bible of 1584 bound with an Elizabethan Book of Common Prayer.

The Lady Chapel houses a 19th Century copy of Sassoferato's 'Praying Madonna'. The east window has glass by Clayton and Bell, 1885. The church has several copies of a Glastonbury monk's chair, one of which was owned by Walpole. The ceiling is panelled and painted with gilded bosses, one of which is a 'Green Man'.

The Sanctuary reredos and altar were designed by Alban Caroe in 1955. Above the altar is the magnificent east window. The Sanctuary also has North and South windows. The North window is very faded and the South window is a jumble of many fragments including the figure of an Archbishop, reputedly St Dunstan, and below an angel bearing a shield on which are the Sacred Wounds. At the bottom are the arms of St Joseph of Arimathea (associated with Abbot Bere).

St Nicholas' Chapel was first mentioned in 1366. On the south wall are various monuments and brass plates, in memory of old Glastonbury families and former vicars. The east window includes a depiction of St Nicholas.

St George seems to have been a popular Saint in Glastonbury and we have a chapel dedicated to him. The chapel was restored, refloored, and refurnished in 1929 as a war memorial. In it are kept two books recording the names of Glastonbury's fallen. The oak screen is a reconstruction of the original, made by Bligh Bond in 1927, incorporating fifteenth century portions found in an old house. The east window includes: St George and the Dragon; St Michael with a goblin holding down the scales of justice and St Bride (St Bridget) with her wolf, tending sheep, with Glastonbury Tor in the background.

The altar is dated 1673 and above it 15th Century linenfold panelling frames the centre panel of a triptych of c.1500 from the school of Conrad Witz. On the west wall is a Head of Christ from a larger painting of the Venetian school, c.1520. This chapel is kept as a quiet place for prayer and meditation. The Blessed Sacrament is reserved here.

Finally, on this brief tour around St John's Church, the south wall has many interesting plaques and memorials, including a memorial to Alice Buckton, authoress.

Further pictures of St John's can be found in our Photo Gallery.