Description Of The Church 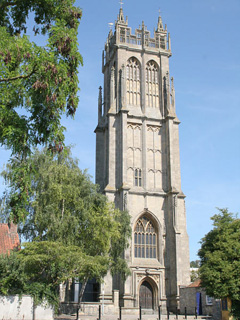 Recent excavations in the chancel, together with others in the 19th Century in the nave, revealed early foundations. These indicate a large central tower that possibly dated from C.950, and a later Norman nave arcade on the same plan as the existing one. A central tower survived until the 15th Century.

At the beginning of the 15th Century the church had suffered some catastrophe such as the collapse of the central tower. A great deal of reroofing and repair was done in 1404, and all through the century rebuilding and refurnishing went on. Sometime during this century further damage was caused by the collapse of several pinnacles, whether from the old or new tower is uncertain, and the nave roof had to be practically rebuilt. The west tower is first mentioned in 1484. By the end of the century the church had assumed the appearance which it has today.

In 1856-57 the church was restored and reseated by Sir George Gilbert Scott at a cost of £3000, and its gothic character re-emphasized.

The church is built of Doulting stone, Street stone, and the local Tor burr. There has been quite a bit of refacing done at various times, particularly on the south side. The magnificent tower rises to a height of 134½ feet (about 41 metres), and is the second tallest parish church tower in Somerset. 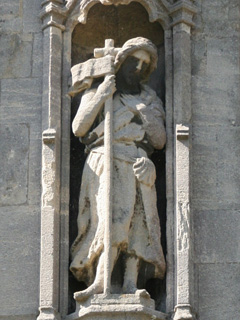 It is said to have been built by Abbot Selwoodn 1475, and this is likely as it is much more richly adorned than the rest of the church. It has three stages; the lower one adorned with niches in some of which the figures of saints remain. The second stage has twin two light panelling, and the bell stage has two four light bell openings. Above this is the crown with projecting shafts and pinnacles. The whole of this crown was rebuilt in 1822 by Pinch of Bath to the original design whilst further small pinnacles were added in 1858 and 1901. The whole of the tower is encased in Doulting ashlar, which reflects the light, and the tower is seen at its best from a distance with the sun shining upon it.

The west doorway is large, flanked with niches and angels above, and in the spandrels are the lamb and flag and the eagle, symbols of St John the Baptist and of St John the Evangelist. The date 1901 on a shield of the angel above the door, commemorates a critical restoration carried out at that time. The tower was found to be in imminent danger of collapse owing to subsidence of its foundations. The north east corner was underpinned with a mass of tiles to a depth of twenty feet where they rested upon rock. In 1975 a new phase of restoration work began with the cleaning and renewing of the west face. Early in 1980 the Crown was restored and all its pinnacles replaced. The design of this tower is not a typical Somerset one, but more similar to those built in Gloucestershire at the time.

On the south wall of the sanctuary there are remnants of a previous window, with a small light leading to the sedillia. Low down on the east wall of St Nicholas' Chapel can be seen vertical marks made by sharpening arrows - archery practice was compulsory after morning service!

The Sanctus bellcote was rebuilt by G G Scott in 1856, the original one having been destroyed in 1805. The original bell was recast in 1922 and bears the inscription 'Sancte Stefane, Ora pro nobis'.

The porch was built in 1428, and the second storey containing the parvis was completed in 1484 at the end of the Wars of the Roses, hence the roses carved over the arch. The statues in the niches over the door, St John the Baptist and St George, are modern, by Read of Exeter. Inside, the porch has lierne vaulting.