The Nave and Aisles 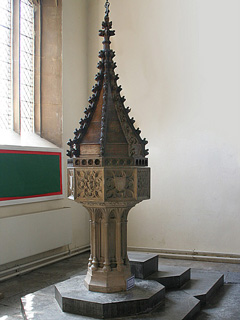 'A fair lightsome church' so Leland the historian described it in 1534, and so it strikes the visitor on entering it today. Two tall arcades of seven bays with clerestory windows above. The slender piers are of standard Somerset design with four hollows. The aisle windows are early 15th Century, while the clerestory windows are of later design. Between these windows are shafts arising from angel corbels, which support the late 15th Century roof. This roof is more ornate than appears at first sight, being adorned with bosses, mouldings and tracery work. This must have been the roof which was extensively repaired after the fall of the pinnacles. Sixteen oak trees from Witham Friary were used for this. The tower arch is panelled and of fine proportions whilst above is fan vaulting.

In the south aisle is the war memorial and a small 15th Century Italian marble relief of the Nativity, bought in Sicily Gallery. The font was designed by Scott in 1856, reputedly from fragments of the original. The stone pulpit was also designed by Scott, perhaps from fragments of the original one, and was carved by Frederick Merrick. Below the pulpit is the tomb of John Cammell, who died in 1487. The purse suggests that he was a lay treasurer of the Abbey but records indicate that he carried out legal work for the Abbot. The fine alabaster carving has many traces of its original covering. Camels are carved on the tomb below.

In the north aisle the most westerly bay is filled with a kitchen and upper room, the next bay with the organ. Over the north door is a very fine carved royal coat of arms of the time of Charles II. Besides the north door is the curious, small blocked up doorway.

Behind the organ console is a St Christopher in glazed tiles in memory of the local Arts and Crafts artisan who created it. The adjacent doorway led, through the blocked doorway above, onto the medieval rood loft that crossed the whole width of the church in front of the original tower. The two eastern bays of the nave are smaller that the others and are on the site of this former central tower. The bases of the first piers from the Chancel arch are different and the angels above them are three quarter length and seem a little later than the other corbels. The adjoining corbels are turned westwards and are left rough on their eastern side. This suggests that the nave was built against the central tower, which was later demolished. and the nave continued with the two small bays. The piers of the chancel arch are very slender to support the great weight thrust upon them. Both have had to be rebuilt and underpinned, the south in 1856 and the north in 1901. The doorway to the loft is very high up on the north wall. Since an organ and singers were positioned on the rood loft the curious opening in the wall over the chancel arch may have enabled these musicians, and also Gospel readers, to see the ceremony at the high altar. 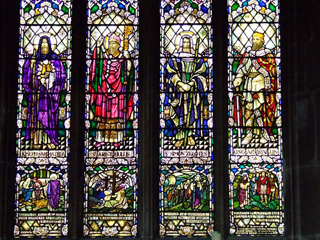 Formerly St Catherine's Chapel, it once contained her image. It has only one large perpendicular north window. The east wall and the adjacent arch are very thick, carrying the rood loft stairway above them. The roof is similar to the aisle roof and does not rest upon the acanthus corbels. In the centre of the transept is what may have been part of a shrine to Joseph of Arimathea, erected in the abbey in the early 15th Century. Displayed in a case on this tomb or shrine is a funeral pall made in 1774 from a cope. This cope was traditionally worn by Abbott Whiting, put to death on the Tor in 1539, although it was probably made during the Abbacy of his predecessor. The 1936 stained glass in the north window is by A J Davies and depicts some of the Glastonbury legends.

This is the Lady Chapel and contained the image of the Blessed Virgin. It was refurnished 1922 to 1930. The roof is panelled and painted with gilded bosses and does not rest on the angel corbels. One of the bosses is of a Green Man. Over the small door to the rood loft is the only classical style monument left in the chapel and dated 1753. However the church was always noted for the paucity of these monuments. The north door was designed in 1910 by W D Caroe for the vestry, incorporating a Caroelatch. There are two north windows and an east window of unusual perpendicular tracery, rebuilt by Merrick in 1856. The glass is by Clayton and Bell, 1885. The sill of this window is high because of the vestry which originally stood outside. The screen was erected in 1932, and is by Read of Exeter. 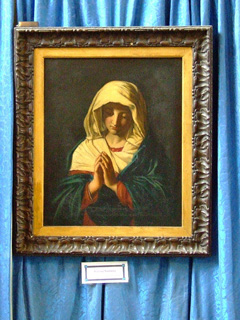 This was built by the Abbey and not by the parishioners. It consists of two bays, with standard Somerset piers and four-centred arches. The north arcade is markedly asymmetrical. All the windows east of the chancel arch are four-centred. The vaults were filled in ineffectively in 1856. The present floor of Kilkenny limestone from Boyle, County Roscommon, was laid in 1987 following further subsidence. There is an oak barrel roof, with wooden angels on the wall plates.

The reredos and altar were designed by Alban Caroe in 1955. Previously it had been restored by Scott in 1856, who also tiled the floor and altered its level. On the south side there is a twofold sedilia. This had been blocked up and was uncovered in 1908. The rather curious stone front to it is by W D Caroe. On the north side is the blocked door which used to lead to the original vestry. It is possible that this wall contains the remains of the Abbots throne. Also on the north wall can be seen the remains of an earlier window. The east window is very large, of seven lights, and nearly filling the whole wall. The tracery below the transom matches that of the tower west window, and is apparently unique to this church. The stained glass is of considerable beauty, and is by Westlake, 1879. In the lights below the transom is some fifteenth century glass in situ, bearing the initials of the original donor, TM. This window contained a jumble of fifteenth century glass, and this was removed by Westlake, reassembled and placed in the north and south windows. 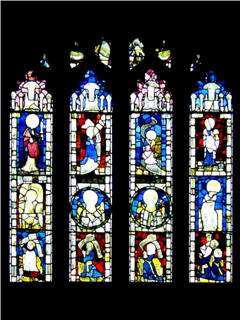 The roof of this chapel is similar to that of the Lady Chapel. The 17th Century altar is the original Laudian altar of the church. The screen was designed by Bligh Bond and erected in 1912. On the south wall are various monuments and brass plates, in memory of old Glastonbury families and former vicars. Of interest is an early 17th Century brass memorial to the Dyer family. This and some others were removed from the chancel floor. There is also a rough Elizabethan stone monumental slab. One east window and two southern ones. The glass in both windows is by Westlake, C.1880. 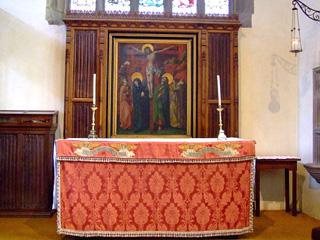 This is occupied by St George's Chapel. St George seems to have been a popular Saint in Glastonbury. The chapel was restored, refloored, and refurnished in 1929 as a war memorial. In it are kept two books recording the names of Glastonbury's fallen. The roof is oak panelled, resting on angel corbels, the only chapel roof to do so, suggesting it is the original.

The oak screen is a reconstruction of the original, made by Bligh Bond in 1927, incorporating 15th Century portions found in an old house which was formerly church property. These portions contain carvings of the Agnus Dei (for St John the Baptist), a pelican in piety (associated with Bishop Fox of Wells), a St George and the Dragon and Tudor Roses. The windows are perpendicular, with the exception of the small west one, formerly blocked up, which has a thirteenth century five cusped rerearch. The east window by Danielli, 1924, contains images of St George, St Michael, St Bride (or Bridget) and St Mary. The south window is by Clayton and Bell, 1867; The west window glass is from 1857.

The altar is dated 1673 and above it 15th Century linenfold panelling frames the centre panel of a triptych of C.1500 from the school of Conrad Witz. It shows Christ on the Cross, flanked by the Church Triumphant and the Synagogue with broken staff. Another panel linked with this is in the Künstmuseum in Basel.

This chapel is kept as a place of quiet for all who wish to use it for prayer and meditation. The white light shows that the Blessed Sacrament is reserved here.